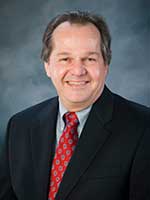 Mark A. Novotny earned his B.S. degree in physics in 1973 from North Dakota State University and his Ph.D. in physics from Leland Stanford Junior University in 1978. He is currently a professor in the Department of Physics and Astronomy, and has served as Head of the Department of Physics and Astronomy since 2001. He was the founding Director of the MSU High Performance Computing Collaboratory (HPC2) Center of Computational Sciences (CCS), which is under the auspices of the College of Arts & Sciences. Prior to joining MSU he was employed at the University of Georgia, Northeastern University, the IBM Scientific Centre in Norway, and Florida State University.

Prof. Novotny has published more than 200 articles in refereed journals. He is co-inventor of a US patent entitled 'Fully Scalable Computer Architecture' and is the inventor of a US provisional patent related to renewable energy. He has mentored in research twenty graduate students, sixteen undergraduate students and fifteen postdoctoral associates. He has received external funding from the National Science Foundation, the US Department of Energy, the US Army, and the US Air Force. He has delivered over one hundred presentations at national and international meetings and institutions in the last decade, including over forty invited presentations.

His broad research areas are computational materials physics and quantum computing.  The current research of Prof. Novotny centers on quantum computing, quantum statistical mechanics, computations for materials with energy storage applications, and on quantum transmission and electrical resistance in nanoparticles.  In the area of electron transmission he is the discovered of ‘quantum dragon nanodevices’, which are disordered materials which in four lead measurements should have zero electrical resistance.

He became a Fellow of the American Physical Society (APS), nominated by the Division of Computational Physics (DCOMP), in 2000 "For original algorithm development and applications of computational statistical mechanics to equilibrium and non-equilibrium problems in condensed-matter physics and materials science". He received the Faculty Research Award from the College of Arts & Sciences in 2006. In 2011 he was named 'Outstanding Referee' by the APS. In 2012 he received a 'Dynasty Foundation Visiting Scientist' award to spend a fortnight in Russia. He became a Fellow of the American Association for the Advancement of Science (AAAS) from the Section on Physics in 2012.